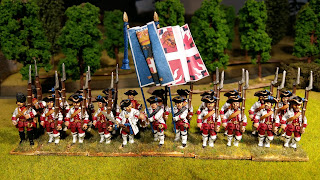 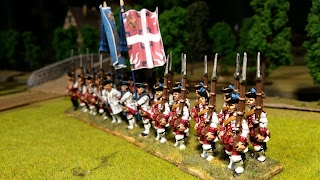 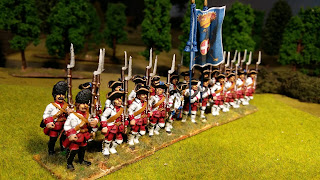 You thought I had forgotten about the WAS, eh?

No way, as it has a special spot in my wargames pantheon. Here is the eleventh battalion of the twelve I will have for the Piedmontese Army. Regiment La Reine has a rather fetching uniform and a flag resembling a Kilim carpet. It is worth saying that the red I have used is a trial run of a Coat d’Arms colour (129 Vampire Red) which is really ‘Garance’, or as close to it as I can get. Garance is a colour that 19th century aficionados will use plenty of as it is the colour of the trousers of French Infantry and much used in Spanish armies too.

For the other ten battalions of Piedmontese I have used Crusader’s 25mm SYW Russians but by accident I came across a pack of SYWR006 from Foundry – Russian SYW again. But these are far nicer figures and even though the Foundry catalogue says they are the same figures in a pack there are actually at least three variations. I will be getting to the Russian infantry soon and will be using hundreds of them. Foundry’s Russian range is fantastic if incomplete – no Observation corps for example. 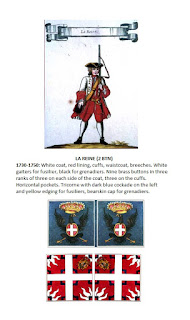 Posted by Painted Soldier at 15:33