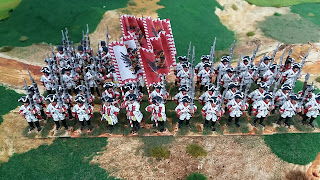 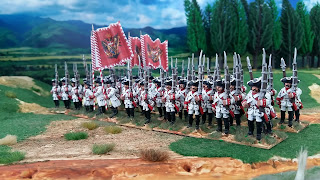 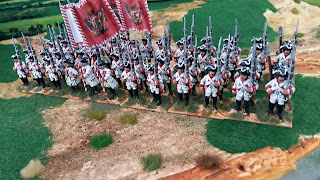 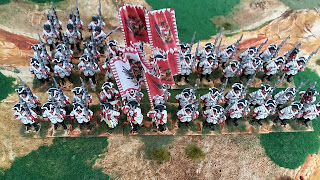 There were two Wurzburg regiments in Austrian service and you have already seen the Blue one in a previous post. This regiment is the better-known of the pair and it was raised slightly earlier.

On September 16 1756 at Werneck, Adam Friedrich Bishop of Würzburg and Duke of Franconia signed a convention with Empress Maria Theresa by which he would supply two infantry regiments for at least two years: the first regiment would be provided at the bishop's expense while the second would be under Austrian pay (40 fl./man). On December 20 1756, the first of these regiments “Rot-Würzburg”, consisting of  2 battalions (each of 6 fusilier coys) and 2 grenadier companies for a total of 1,860 men, had already taken service with the Austrian Army and left for Bohemia. It had been raised from troopers of the 3 existing Würzburg infantry regiments (Hutten and Drachsdorff regiments became the first and second battalions respectively and were brought up to strength with 400 men from the third regiment, Kolb).

The regiment was organised similar to the Austrian infantry in 2 Feldbataillone and 2 companies of grenadiers. It fought with the Austrian army from late in 1756 until 1759. In 1760 it joined the Reichsarmee.

Even though Rot Würzburg Infantry and Blau Würzburg Infantry both served in the same army during the 1760 campaign, there were no contacts between them. The relations between the staffs of the two regiments were not very good! Heavy losses had placed an increasing strain on Würzburg's limited resources, and the Bishop of Würzburg pressed the Austrians into amalgamating his two regiments into a single regiment entitled Kaiserlich Würzburg consisting of 3 bns and 2 grenadier coys. The reorganisation was made official on December 7. This raises the question as to what uniform the new regiment wore?
Posted by Painted Soldier at 04:28