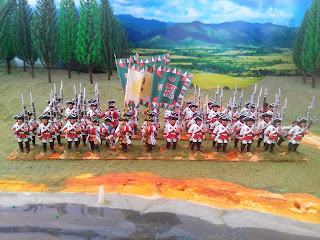 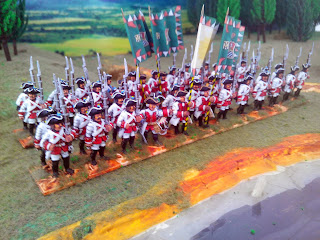 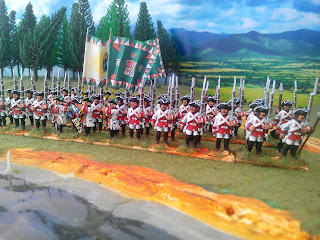 The regiment was raised in Stuttgart in 1710 as regiment “Prinz Heinrich von Württemberg”.In 1716, it  took part in the campaign against the Turks. It then served in Italy. During the War of the Polish Succession, in 1735, it served on the Rhine.

Its conservative uniform may reflect the fact that it's inhaber was the other side of Germany in Brunswick!
By the SYW the regiment should have dropped the red waistcoat and the drummers should have ditched the reversed colours and had issued white coats. But the uniform has retained many older fashioned features which suggests (my theory) a difficulty in communicating orders from Vienna. No SMS from Vienna "Hey Dudes, time to ditch the red" and for this reason its stands out as a pretty regiment. Also, to reflect this 'conservatism' I have given them the green Non-Imperial 1743 flags which were issued to a few units although we don't know for sure which. Certainly upon resumption of the Imperial dignity Vienna ordered these humiliating flags replaced but flags were costly and it took time. 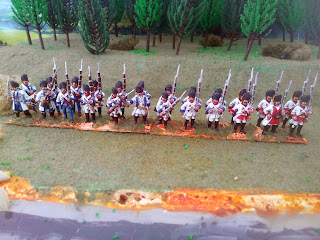 Lastly we have here the grenadier companies converged from the four regiments we have painted in this recent 'surge'.
Posted by Painted Soldier at 05:34