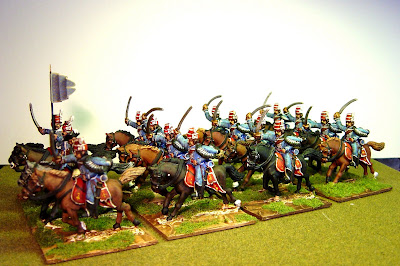 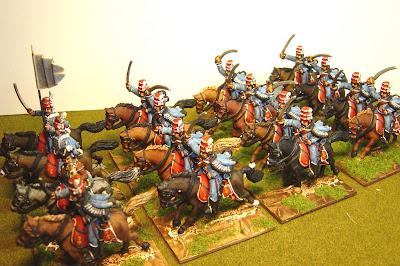 My apologies for being quiet of late but I have been rounding off a number of projects and there
will be quite a bit to post over the next few weeks.

Meanwhile, here is a French SYW regiment of Hussars. The use of hussars was in its infancy in Western European nations and the French only had four regiments, mostly raised by Hungarian emigres. This regiment, Bercheny, was probably the best of them and one regiment, Polleresky's, was disbanded in 1758, (its squadrons hived off to other regiments) for doing what hussars do rather well - looting and pillaging. They sure look pretty but their quality leaves much to be desired.

The figures are from Front Rank. The flag is conjectural.
Posted by Painted Soldier at 09:38