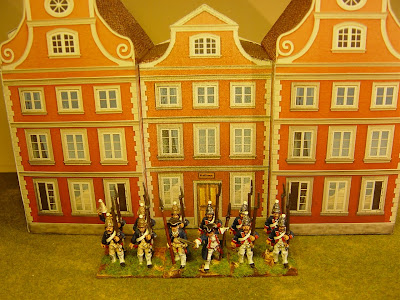 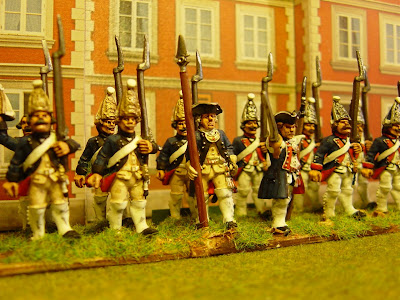 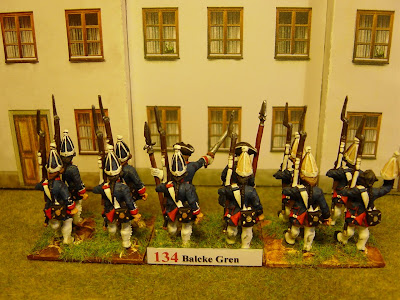 I'm having two battalions of Converged Hessian grenadiers in my SYW/Pragmatic army and this is the first of them. As I'm doing the post-1760 Hessian organization, they are small battalions (about 400 men). They are the grenadiers of Füsilier-Regiment von Gilsa (on the left with black facings) and Prinz Karl Infantry (on the right with red facings). The other battalion (Stirn) will be ready in a couple of days.

The background is the new Rathaus for the new town I've started work on. This is my own conversion of a Schreiber card building - the originals appear on the left and the right and in the centre is a scanned conversion. As these card buildings are in 1:87 (which, I'd guess is about 20mm) I've needed to enlarge the doors which I have done by scanning, enlarging and pasting. One of the things I've noticed about smaller scale buildings is that one looks at them, and the figures standing next to them, in terms of the doors, not the windows: if the figures look like they could enter by the doors, it works, and if not, it does not. This will be a town of at least thirty buildings and I've started in the town square with the most important town building - the town hall or Rathaus.

After the success of the ACW game (I really mean the success of the rules, Carnage and Glory II) I've started putting numbers on the backs of these units too. All units have to be numbered and I've made these slightly larger than those I made up for the ACW units.

French artillery is en-route but not before I've finished this grenadier brigade.
The only one left to paint is the Hanoverian converged unit and, when that is complete, the five battalion brigade will be done. Actually almost all the Allied infantry is now finished - I'm on the home straight!
Posted by Painted Soldier at 15:50