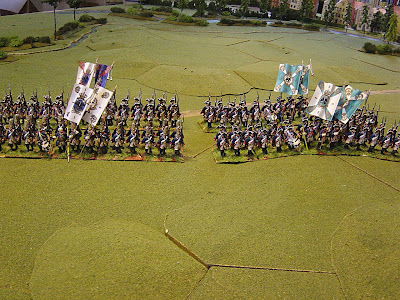 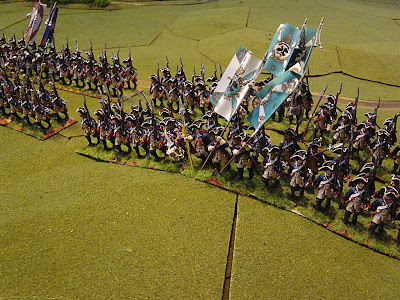 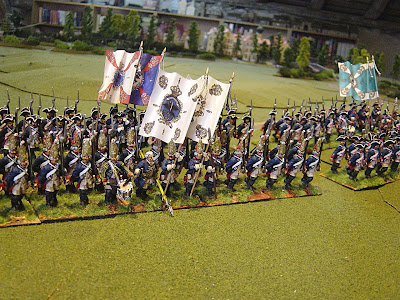 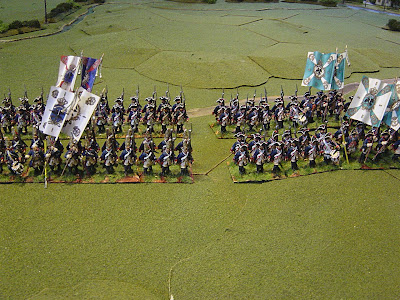 You've seen pictures of these figures before but not together on the table and not since I rebased them all (I actually enjoy rebasing figures!). I prefer the shoulder-to-shoulder look so they are all rebased on bases 60mm x 50mm. I plan to do two small-ish armies of Prussians and Austrians using these great Sash and Saber figures - each army being about 12 battalions and 20 squadrons strong. This is a plug for Chris at S&S and, although I know he is busy doing 2nd generation Old Glory stuff, I'm hoping he returns soon to add to his SYW range. Some cavalry, generals and artillery would be most welcome. There is something about the clunk as you move these figures around - each base weighs in at 5 ounces or 140 grams so the brigade comes in at 2.8 kilograms or 6 and a half pounds in weight.

On the front left (position of honour) is IR6 Grenadier-Garde with, behind them, IR18 Prinz von Preussen, 1st battalion. To the right are the two battalions of IR12 von Finck.

The first brigade of the Austrians is patiently awaiting reinforcements.