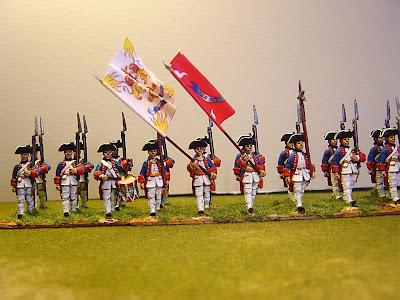 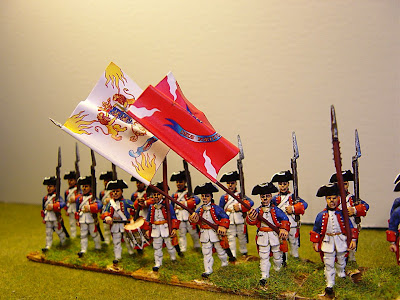 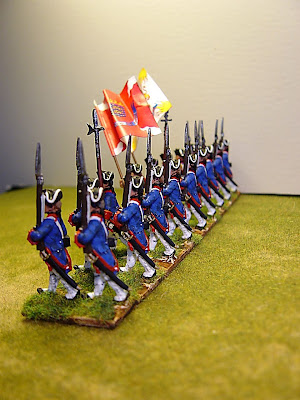 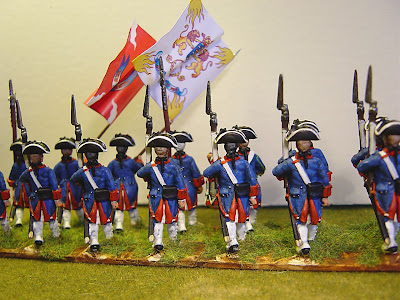 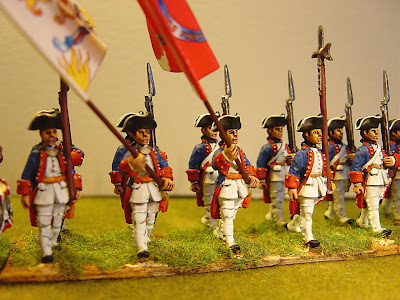 I've just finished this battalion of Dutch infantry from the new Eureka 25/28mm War of the Austrian Succession range. I'm pleased with the result although I don't like my standard bearers holding their flags at 45 degrees, preferring them held vertically.

This is regiment Aylva and the flags are from Vaubanner.

As for the figures themselves:
On the plus side they are nice sculpts, crisp and clean. The coat, from the rear, has long tails and the buttons are raised making them easy to paint.
On the negative side, I find the faces quite difficult to paint as I like to put eyes in and these are not sculpted. But if you don't paint eyes you should find them easy. Oddly, there is no hair around the ears and I have had to paint this in.
There are no variations in the figures but to give Eureka their due they have covered the whole range from grenadiers, infantry, with and without lapels, artillery, mounted officers and cavalry. So if you want Dutch troops of the mid-18th century, this is the only range available.

Lastly, I've used as my painting guide Stephen Manley's "Uniforms of the Dutch Army 1740-48", and he says the coat colour (Blue)(the most common coat colour) was a shade "...not quite as dark as 'Prussian blue' and that the "...coat was more generously cut than was the case in later years". He also says that "...officer's coats were not usually turned back, even when mounted." The officers on foot have turn backs.

Nonetheless, despite a few minor inaccuracies, this is a great new range and well done Eureka!
Posted by Painted Soldier at 11:51