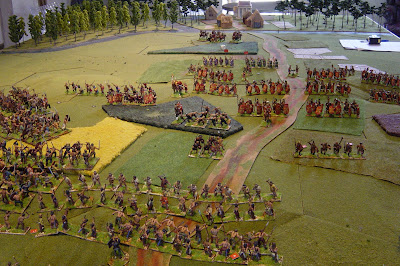 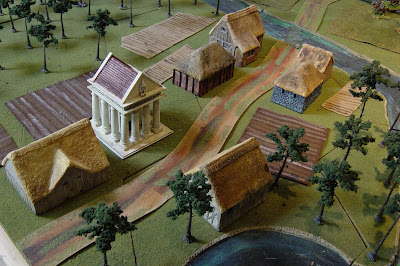 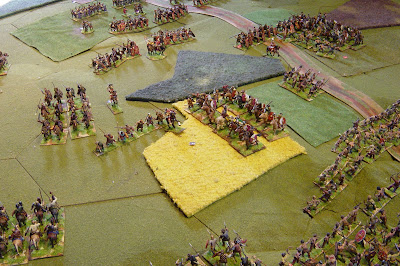 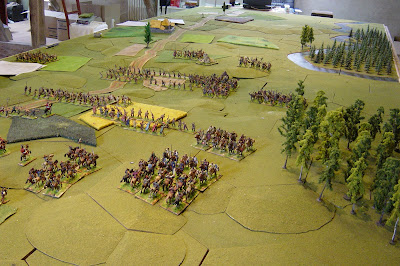 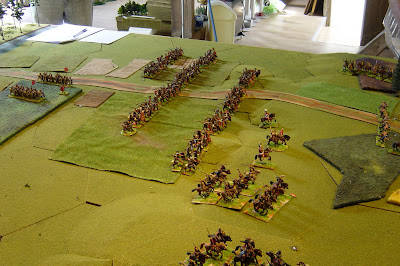 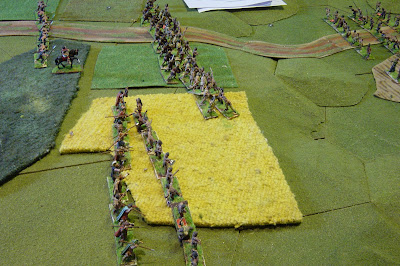 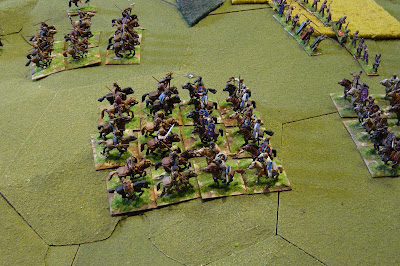 The pictures above are the conclusion of the battle of Plexatia. The reason why I have not put them in any order or given any further explanation is because the rules let us down with some bizarre results. The rules were “Macedon and Rome” by Computer Strategies.

Given the disheartening result on day two, I’m surprised that the new gamers I was playing with actually enjoyed themselves but they did, so there was a silver lining to this cloud.

Day one was quite normal – both sides threw their skirmishers and cavalry forward while the main warbands or cohorts advanced. Day one was entirely taken up by this skirmishing (with little casualties) and, by the end of the day (wargaming day – i.e. by about move 9) the four regiments of the Gallic Sotiates force had generally gained the upper hand against their enemies.

Day two was going to be the main event. The warbands were going to charge the cohorts and the battle would be resolved by these ‘serious’ units. Then things started to go pear-shaped. The first warband/cohort melee threw up a weird results – BOTH units were destroyed, so the computer said. No winners, both losers, both units wiped out! Weird we all shouted. No push backs.

Maybe this was a freak result. We tried another pair of units and both were destroyed again. By now I realised that these computer rules had a serious flaw or maybe more than just one. Lastly, we threw the 600 Gallic Soldurii (Chieftain’s personal guard) in against a Thracian unit that was already looking dodgy and was down to half strength. The Soldurii were fresh and in fine shape. Guess what! The Soldurii were destroyed. At that point we gave up.

I wrote to Clinton, the writer of the software, and to quote part of his email “I can only guess that the problem was something local on your PC”. Not very satisfactory but he did attach all the latest software upgrades so in the next few months I’ll replay some of the melees and see what happens. If they work, then that will be great and we will continue to use them. If not, the bin seems like the appropriate place for them.

Posted by Painted Soldier at 16:55