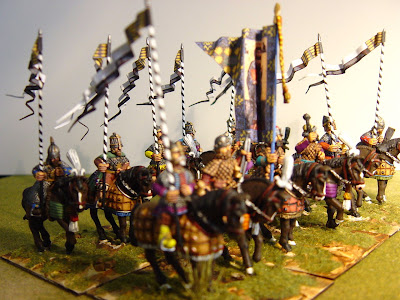 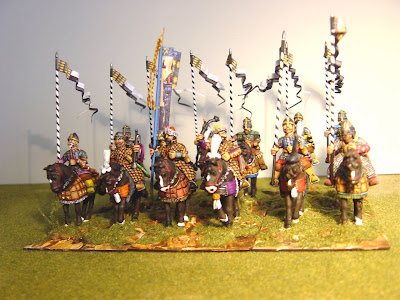 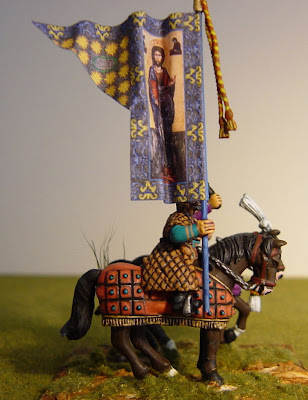 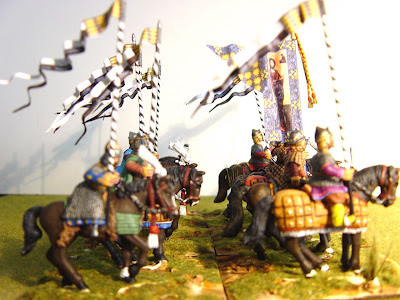 "Here's fragment of Jiltsy's description by Bernard Tanner, member of Polish-Lithuanian mission in Moscow in 1678 (I know, later then those from You minis)- maybe You'll find it interesting (sorry for rough translation...):'all of them were wearing long loose red garments. Their horses were white like snow, [Jiltsy] have on their arms [he rather think about back than arms] beautifully painted wings, easily seen above their heads. They have long lances [originally 'kopie' - like Husaria] - to each spearhead there was attached golden effigy of flying dragon (sic!) that was turning around whenever wind blows. You would think that they're regiment of Angels!'
Posted by Painted Soldier at 15:35 2 comments: 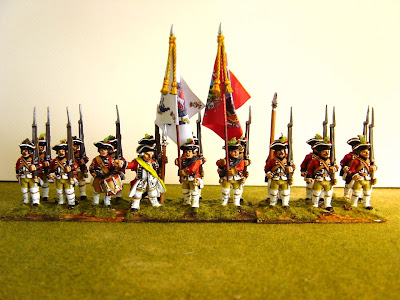 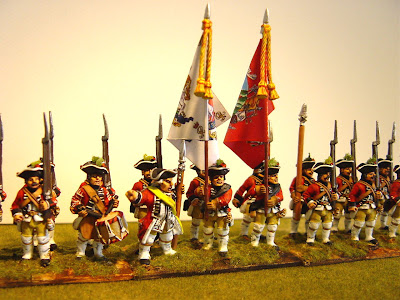 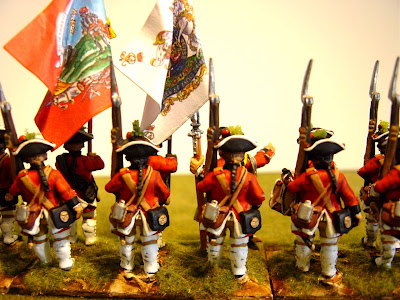 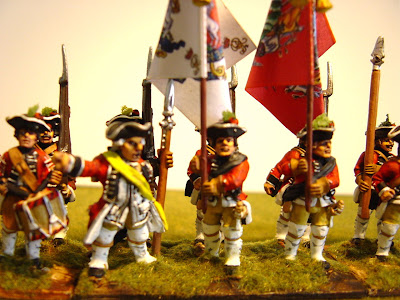 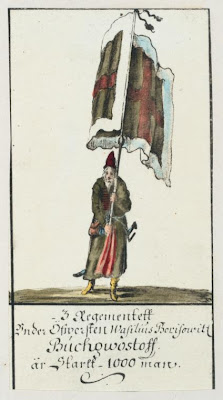 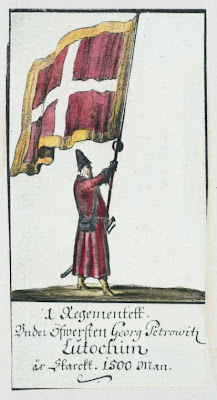 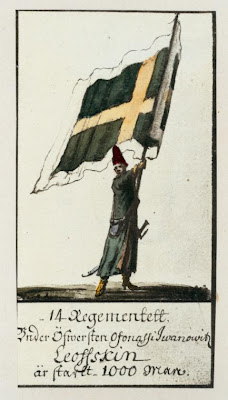 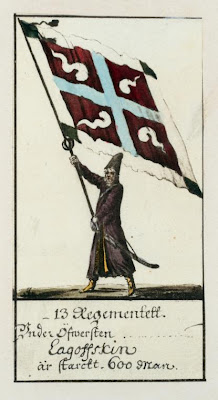 These are the last four.

Posted by Painted Soldier at 19:40 No comments: 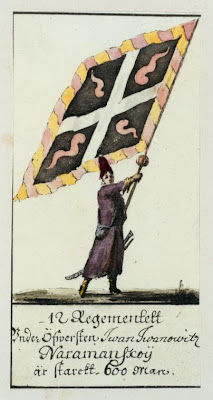 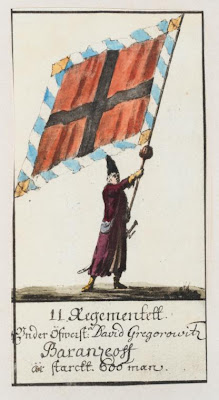 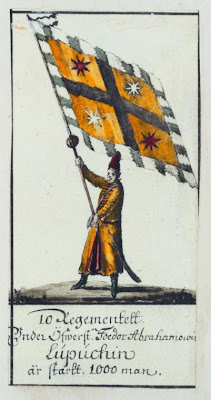 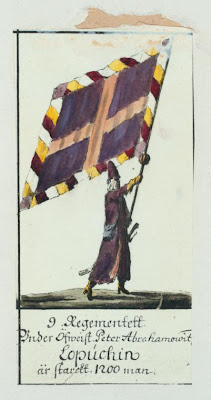 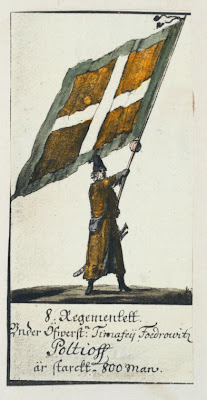 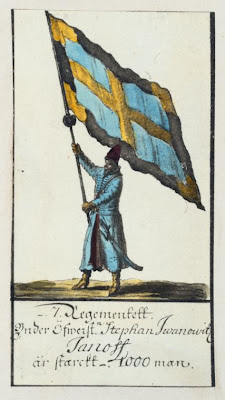 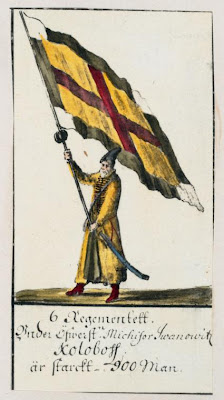 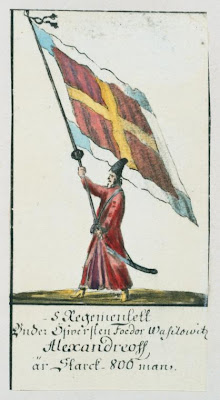 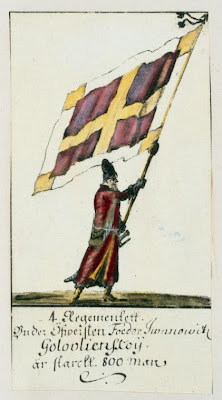 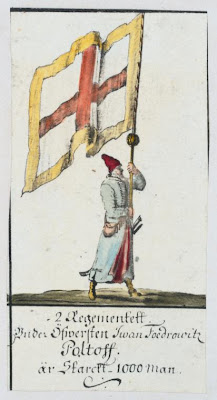 These are the first 10 drawings of the 14 I have of Streltsi. As interesting as the actual illustrations of flags are the colours of the streltsi uniforms themselves. I will post the last four shortly.
Each illustration has the regimental number, the strength of the unit and its regimental colonel's name.

Posted by Painted Soldier at 19:26 No comments: 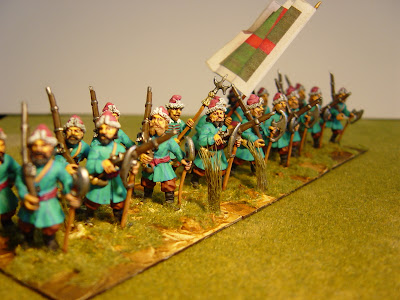 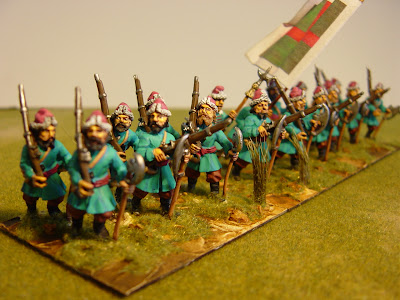 I've finally branched out in a new period - Eastern European Renaissance. While the English Civil War was occupying the British Isles, Eastern Europe was in termoil with the Russians fighting the Poles, Swedes and Ottomans with a Cossack rebellion thrown in for good measure.
These TAG (The Assault Group) figures are fun to paint. They represent a provincial Streltsi unit of the Russian army under Tsar Alexis I. Besides a musket, they carry a Berdische Axe, which was used both as a rest for the musket as well as a close combat weapon. The Streltsi served as soldiers (one year on, one year off) as well as town policemen and firemen. I finally got a chance to use this colour - Jade green - from Coat d'arms paints.
I intend doing about 10 infantry and 10 cavalry units for the Russians before I move on to do a Polish army and then, finally, an Ottoman one as well. Maybe a small Cossack host as well.
Later on this week I will post a unit of Russian Guard cavalry.

Posted by Painted Soldier at 15:46 No comments: