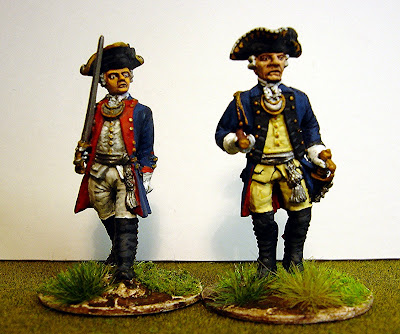 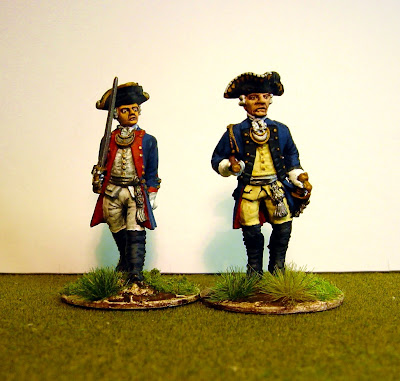 I would normally use mounted figures to represent Generals of Brigade, but as nobody has made them yet I am having to make do with officers on foot. For 40mm there are three companies making figures for the SYW or useable for that period:

The gentleman on the left is a Front Rank figure painted as Generalmajor Karl Ferdinand von Hagen, who was killed at Hochkirch. Although he looks a bit young, this is a well sculpted figure that comes with a separate right arm and a choice of 3 separate heads.

The figure on the right (whom you have seen before) is from Trident and represents Generalmajor Emanuel von Schoning, who was killed at the battle of Prague. Both figures are wearing regimental uniform, in the case of the former IR8 and in the case of the latter, IR46.

Size-wise they sit well side by side. The Front Rank figure has led an epicurean existance, as have all figures from this manufacturer, which would account for his ample stomach whereas the chap from Trident has a somewhat lean and hungry look.

I know it is Tuesday, but Blogger is acting like it is Monday after a busy weekend out clubbing!
In other words, Blooger is acting up, so here is the text that should have gone with the pictures in the preceeding post:

As promised, I’m showing you the 40mm Austrian SYW Dragoon Regiment Sachsen-Gotha, resplendent in its red coats and light blue facings. The cavalry figures come from Chris Hughes at Sash & Saber (Saber spelt the American way – when I fenced as a youth a long time ago a Saber was a “Sabre” but that is the richness of the English language!) and they come with three different horse poses and three different cavalrymen poses and separate hands with swords in them. This allows great variety in pose and I think he has done a great job showing the movement of a cavalry charge. So far then, in his 40mm range, you can buy Prussian musketeers, fusiliers, grenadiers, some artillery and dragoons. In the Austrian range you can buy Austrian and Hungarian fusiliers and grenadiers, artillery and dragoons. I’m hoping, as he fills out this range, to see wildly charging hussars and more static Cuirassiers in reserve not to mention generals, grenzers and other light infantry.The Prussians being charged (the unfortunate IR 12 Erbprinz von Hessen-Darmstadt) are from Tridents AWI range of Hessians, which work perfectly for the Prussians.

In the Kronoskaf article on the Sachsen-Gotha dragoons, they show a different lace on the horse furniture but I believe this lace might be a later-war detail. I have given them the plain red schabraque with yellow lace as I think this is more appropriate for WAS or early SYW. They also mention a completely different colour for the schabraques of officers (in this case green) and I think that too is a late war change but this time I kept that as it made a nice change and it might make it easier for these chaps to rally in the event of disaster. Still the way they are charging forward, one feels, perhaps, that ones simpathies lie more with the Prussian infantry about to be carved up.

Lastly please look at the buildings in the background. They are 25mm scale and work well with the 40mm figures. Doors are the key – stick a 40mm figure next to a 25mm door and it looks foolish, but if there is no door visable then a large 25mm building will work with 40mm. 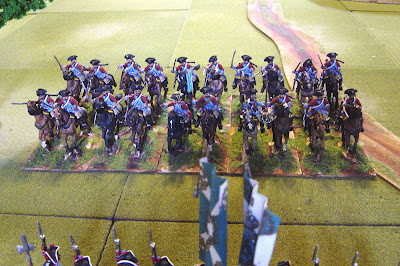 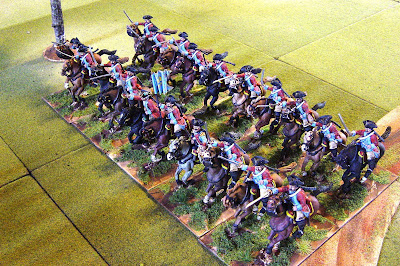 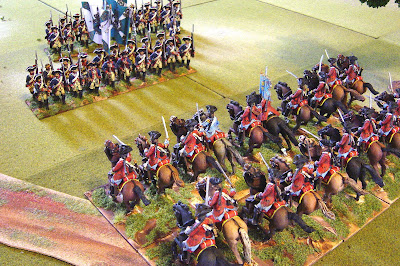 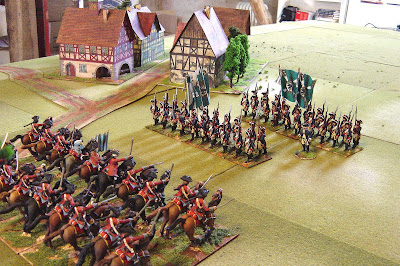 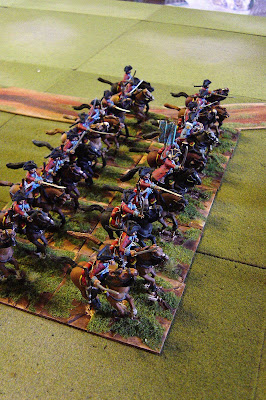 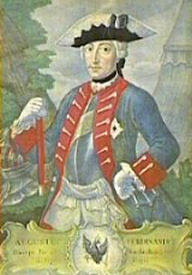 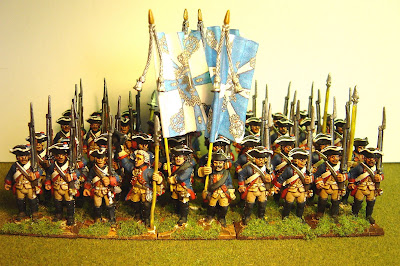 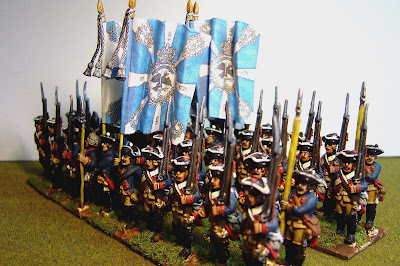 This is one of my favourite Prussian Infantry Regiments, No. 34, whose chef was Prince August Ferdinand, one of Frederick's younger brothers, because of the jazzy flags. It was raised in 1740 from the Garde Regiment No.15 and from Garrison regiments one and two.

Again, the figures are a mix of Foundry, Front Rank and Crusader - mostly the latter. 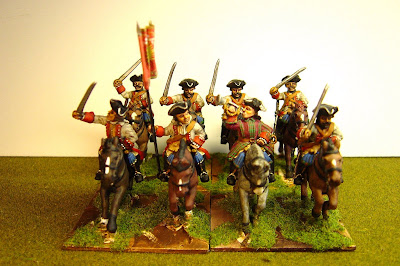 Another French cavalry regiment - this time Talleyrand. There is very little information, no, let me re-phrase that, there is NO information that I have been able to find on the musician's uniform so I have painted it in dark red with red/green lace. Figures are by Front Rank.

Also done and ready to show you is a 20 figure Austrian Dragoon regiment in 40mm. I have ordered some 25mm flags, which I will need to re-scale, and then I'll post pictures here. These are from Sash & Saber.